I was recently at the MoMA in New York on a Friday night when you can get in for free. There were hordes of people waiting in line, more crowds already inside the building, and there were ten people deep by almost every painting hanging on the walls.

All of them were speaking a foreign language. French, Italian, Portuguese, Spanish, Russian, you name it, I heard it.

There were two. My friend, Elle and me. We didn’t speak much because we were craning our necks to see the Picassos, Van Goghs, and Monets in the room. 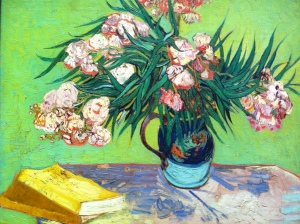 There was a group of Italians occupying the middle of the room listening with rapt attention to their guide. He was a tall man, with greying hair at the temples, immaculately dressed in a European-cut suit and a yellow ascot. He was pointing out historical details about the artists with a flourish of hand gestures. This all in Italian, of course. And without a textbook.

Behind me were people of all ages, jostling for position, photographing Van Gogh’s Starry Night on their iPads. They spoke Russian.

Even the guards, in their blue uniforms, whose job was to make sure visitors kept a respectable distance from the masterpieces, looked foreign-born.

So where were the Americans?

In the Architecture and Design exhibit? No.

Viewing the current exhibit? No.

In the contemporary galleries? No.

When I rounded the corner by the Painting and Sculpture Galleries, that’s where I spotted them.

In line waiting to get into the restaurant.

Does that count as a museum visit?

Calvin says, “Only if you snap a few pics on the way to the bathroom.”

2 thoughts on “Are Museums For Americans Too?”