I met a woman I instantly fell in love with. Her name is Cordelia Spencer and she’s a retired family therapist of 30 years who now wants to spend her time writing mysteries.

She’s moved out of the Bay Area for Southern Oregon where she’s among her kind – writers, actors and impersonators.

“Having spent so many years listening to patients I feel I can become them,” she says with a chuckle.  “Oh the stories I can tell.” 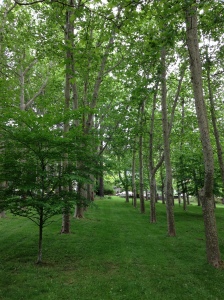 Her one companion who is allowed to distract her is Maurice, a 2-year old Cardigan Corgi who was bequeathed to her by a patient who died.  You will find Maurice with a wary eye constantly by her side. “At first I was angry at having to take him, but he’s become my best friend. I suspect he plotted his way into my heart.”

Cordelia and Maurice live in a condo overlooking a beautiful park filled with trees and a roaring creek. They have no furniture in the apartment except for a bed and a computer table for Cordelia’s laptop. Cordelia prefers it that way. She spent 30 years in a home with a husband and two children surrounded by clutter. Now she has the space she craves and likes it that way. Maurice, on the other hand is not so sure because he spent the first two years of his life on silk sheets and enjoyed a pampered life. Since being adopted he’s had to learn to be a dog.

So far Cordelia has been unable to write a word. Every time she opens her laptop her children call or a friend drops by. And they usually need help. And Cordelia can’t say no.

Calvin says,”I have to meet this Maurice character. Silk sheets? Are you kidding me?”

2 thoughts on “A New Friend”