This morning a young woman with green hair and brown roots got on the train. Her head looked like a tree was growing out of it, except the green was more the color of fizzy pop rock candy. She sat where everybody could see her. For the rest of the ride she kept her head bent down so her hair covered most of her face like a veil while she stared at her smart phone. 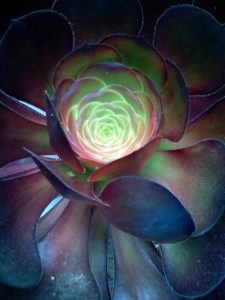 The person who sat next to me was someone I couldn’t quite identify at first. Man or woman? Hard to tell. He/she wore black pants, black shirt, black shoes and carried a black backpack. Her hair was blonde and cut close like a man’s. She wore no jewelry or make-up. She yanked out a book, the hardcover kind with rustling pages, and stuck her face in it all the way to the city. At the first stop she got up and bolted out the door. At least she reads.

Two women, who boarded with me, spent the entire trip talking about the dogs they owned. Then they went on to the different breeders they’d known, the different size dogs, and the weaknesses and strengths of the breeds. It was a steady commentary of opinions and judgments until they arrived at their stop. That’s when one said to the other, “Well, it was nice meeting you.”

There’s a man on my car who sits next to the train operator’s booth and welcomes everyone on board from his seat. He’s friends with every operator on that shift and knows them by name. He knows many of the passengers, too, and says good morning to each. He irritates me. I don’t know why, but he does. Maybe because I can’t be cheery that early, or make small talk with a stranger who wants to draw me into his routine, which would obligate me to acknowledge him every morning. I think it’s presumptuous of him to think I’d capitulate to his charms.

Calvin says, “It’s not him, it’s you. You’d like the whole car to yourself.”