My friend and her husband are driving cross country to deliver a car to their daughter in D.C.

Nevada and Utah were blanketed in snow, which made for stunning pictures. Wyoming was another matter. Flat is the only word for it. A view of the occasional cow on some green land was the only bump on the landscape.

Now they’re in Iowa, home of John Wayne and its depressing Main Street, which looks more like a movie set than a real place for real people who work, play and raise families. 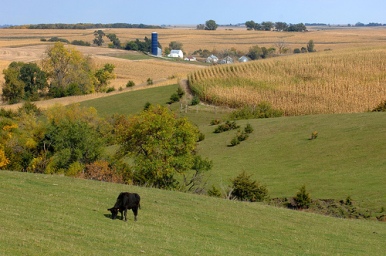 I’m so used to living on the coasts that I forget there’s a whole country in the middle of the country. It looks like a foreign land to me. I expect people to be speaking another language and living another culture. And perhaps they do. They are ranchers and farmers and people who have worked the cornfields all their lives.

I looked up employment in Iowa. The list included pizza driver, office clerk, test administrator and library assistant. I noticed there weren’t any tech jobs. That’s probably because there’s no internet. Who needs internet for herding cows? Two border collies will do.

What I did discover were a ton of bloggers from Iowa. A lot of them are food blogs. But I don’t see Iowa as a foodie destination. How many blog posts do you need for grilling hamburgers?

It’s worth mentioning that there’s the famous Iowa’s Writers’ Workshop, which has produced many award-winning authors over the years.

For some, looking at pasture lands and grazing cattle fosters the urge to write. I, for one, wouldn’t find any inspiration looking at a cow chewing the cud. I’d need some action like a line of geese following a marching band.

Calvin says, “And to think Iowa is the bellwether of American politics.”

10 thoughts on “Iowa Is Good for Writing”