We’ve had two weeks of President Trump and the country is upside down in turmoil, or so the media tells us. Now the speculation is whether Melania will be joining her husband in the White House or keeping to her high-rise luxurious surroundings in New York. Either place she can’t go very far anymore without a Secret Service detail following her every step. Where’s the fun in that? She might as well immigrate to the White House where the action is. I hope she emerges as one of the best First Ladies we’ve had in years because she’s certainly going to turn heads wherever she goes. 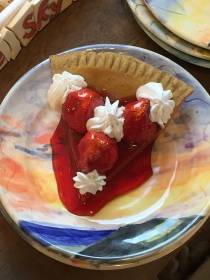 Now there’s talk of California wanting to secede and become its own country. Sort of what England has done with the EU. Except are we ready for Hollywood to run the place? You don’t think they’ll keep Sacramento as the state capitol do you, when they have studio lots galore where they can set up a throne for the president? And who would be president? Arnold Schwarzenegger? At least he had a real run at politics as governor. Martin Sheen? I suppose he could refer back to his fake experience as president in the West Wing. I know. Tony Robbins. He’s so popular and has helped so many lost souls regain their emotional equilibrium that he’d win by a landslide. Besides, how long can Tony keep walking over live coals and bellowing, “You can do it!” He needs a new gig.

Calvin says, “I like the sound of citizen of California. I’d get a beagle green card and better food.”

2 thoughts on “Chaos on Parade”