Walking to work today I saw a man running across the street before the light changed. He was sporting a long red beard and a beanie and what looked like a black scarf in motion around his shoulders. But that was no scarf. It was a jet black cat with a diamond collar gripping his jacket to stay on for the ride. I tried to catch up to find out more, but they moved at a clip and disappeared around a corner. I’ve seen parrots on people’s shoulders, but not a cat like this.

I’ve had my fair share of cats over the years. One, a Russian Blue, walked out on us one day and disappeared. She didn’t even leave a note. Weeks later our neighbors two doors away, we lived in an apartment complex at the time, knocked on our door one night and said, “Did you own a Russian Blue?” I noticed right away the past tense of that question. Immediately I thought of bad news like they ran over her. “She moved into our home, we just came to tell you.”

On another occasion, another cat, this one a Siamese with an attitude, packed her bags and left the house when we adopted a second cat. She wasn’t going to have any part of it, so she walked across the street to our neighbor’s house, climbed a tree and hopped onto their roof. And there she stayed for weeks. She’d come home for food and then leave again. Fortunately for her it was summer with warm nights. As soon as the weather cooled down, we found her in our house again, curled up in front of the fireplace, without giving an explanation.

There’s something about cats that I respect. They’re really in charge even if you think you are.

Calvin says, “A bunch of rot. Cats are vermin. Good for sniffing into oblivion.”

We have a rodent in our roof. He moves in when the sun dips below the horizon and scratches all night. It sounds like he’s digging the Panama Canal in there. We’ve had the pest control people out to investigate, but this critter is smart. Or they kill one and another comes in to take its place. It’s been particularly cold this season so I don’t blame him for seeking a warm spot. But the word’s gone out. My roof has become a revolving door.

Alf has put traps up there with peanut butter, but that hasn’t worked either. The thing eats the food, tip toes out of the trap, and laughs. I hear him snickering in between scratches.

Lately I’ve noticed a neighborhood cat around our house.

A light grey beauty with yellow eyes. She looks strikingly familiar and then the other day it hit me. She looks identical to the kitten Alf and I rescued a year ago and is now thriving in a new home. This adult cat must have been the mother.

So mom cat is patrolling our grounds. One afternoon I found her on the roof, soaking up the afternoon rays by what must be the hole the resident rodent climbs into every day. She’s on it. In the last few nights we haven’t heard any scratching. Could it be she caught this nasty rat as a thank you for fostering her kitten and finding her a great family to live with? That would be utterly delightful.

Calvin says, “Don’t get sentimental over this. Cats are savages. They’ll eat anything.”

Every morning a black and white cat appears at the window of the apartment across from my office. A long stretch. A pink yawn. It pokes at the sill with its front paw testing to see if the window is open. It’s not. It sits up and leans against the glass absorbing the sun with its eyes closed. It curls its black tail and stays as still as a Latin American question mark at the beginning of a sentence.
Lately it hasn’t been at its post when I arrive, which worries me. I immediately think it finally walked out on the ledge, slipped and fell to its death, except cats don’t typically die this way because they’re acrobats and reverse themselves in mid-fall and land on all four legs.

So what happened? I walk out of the building and there it is in the middle of a stacks of bricks, not-so thriving plants, and a rusting car. The lot next door is a dumping ground for all things discarded.
It’s black and white markings peak through the dying plants. It looks at me. It seems quite happy tip-toeing among the ruins. The sun is on its back. It’s free. I’m relieved and come back indoors.
The next day I come into my office, it’s back at the window looking down. I guess this is the arrangement with its owner, like a wayward son, sometimes coming home, but mostly on the prowl.
Calvin says, “A vagabond with a pied-à-terre.”

A colleague of mine was recently on a road trip in Alabama. He was headed to a town north of Atlanta GA and stopped halfway for gas.

“Hey, you got a cat in there?” the guy next to him at the pump asked.

“There’s definitely a cat…open your hood,” the guy said.

Sure enough there was a kitten lying on top of the battery. It got up and scrambled into the engine somewhere. That’s when eight people tried for 45 minutes to rescue it, but it eluded them.

My colleague had a meeting he had to get to on time, so he closed the hood and kept driving.

iles at 75-miles an hour he got to his hotel, and turned off the engine. He could hear the kitten crying. He drove to the local tire store where the guys spent a half hour taking the car apart, and after chasing a frantic kitten around the engine, they finally captured it.

That kitten deserves a medal for its bravery, tenacity and powerful will to live. One of the guys felt the same way. He took it home to his wife.

Calvin says, “Stupid cats. No dog in his right mind would travel like that.”

Have you noticed the plethora of apps out there? I have. Some are crazy funny. For instance I noticed one that will reserve a parking space for you in San Francisco. Everybody knows it’s impossible to park in the city, so this is helpful. But I wonder how they do it. Have they contracted people all over the city to call in spaces they see in their areas? Like the new florists in town who have a staff of bicyclists delivering burlap-wrapped bouquets all over the city, the parking space locators are lurking in every neighborhood during commute hours.

I write haiku and sure enough there’s an app out there. https://itunes.apple.com/us/app/thf-haiku/id453464896?mt=8 It’s full of the best haiku by poets from different countries. This is an inspiring app to have on my phone. It gives me a moment of creativity every day.

There’s the app for dog lovers. You can choose dogs barking, a dog simulator (no poop to pick up), a breed guide, dogs playing poker, pet care, grooming and training, and super hero pups.

I won’t go into the cat apps because they’re so many I wouldn’t have room to name them all, but one caught my attention – My Talking Tom.

And for the bird lover, there’s the Audubon Bird Guide that’s free. This comes in handy when you’re walking to work and notice a dead bird splayed at the entrance of your office building.

Calvin says, “Is there a beagle app wafting the right scents we love?”

It’s been raining cats and dogs.

They’ve been under my window at night hissing and booing.

Every day there’s a parade of them sniffing my bushes around the house. Black, white, grey and the occasional tortoise. They prance along with tails high. They learn who’s been there. Then they leave the next memoir installment detailing the gossip of their sordid little lives for the others to stay current.

To my knowledge there’s hasn’t been a runaway best seller yet.

They’re not too happy this week.

The daily Feline Gazette has been watered down from hard core news to sound bites that are water logged and hold no new mews. The social media section has mud caked on its whiskers. The local news, well there isn’t much due to the storms, which has led everybody indoors to lick their paws.

The few still out there got to witness drama in their own backyard last night.

A train derailed through the canyon. A mudslide washed over a portion of the tracks. One of the cars fell over on its side and slid down the embankment and was baptized in the creek. Fortunately no one lost life or limb, a few ended in the hospital but were later released, and most commuters got home without a scratch.

Those intrepid felines who gathered in the trees got to witness the first responders take charge and do their jobs. It was exhilarating. They’ll have an article in the next edition of the Gazette with their by-line.

If it stops raining.

Calvin says, “Cats are stupid. Why go out in the rain when you can burrow under a down comforter and eat bonbons?”

El gato has a new home. One of my co-workers and his wife wanted him, so we put him in a carrier and drove him to his new owners last night. He meowed, scratched and complained the whole way. When I lifted him out of the carrier and placed him in the wife’s arms, he scrambled up her arm and nestled into her neck.

A heart-warming scene if there ever was one.

What I didn’t know was that there was a dog in the picture, too. He was shut out in the garage while we did the handover in the living room. I asked what kind of dog they had because the racket he was making at the garage door sounding like he was the size of a bear and I was afraid we’d be taking el gato back home with us. 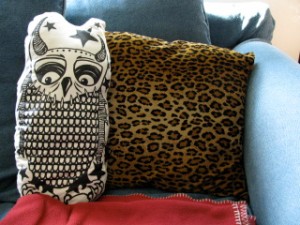 “He knows something’s up,” he said.

I’ll say. It sounded like he was throwing himself against the door with all the force of a hurricane.

I had visions of fur flying and hissing and booing the instant the dog was allowed inside the house.

“Don’t worry, they’ll grow up to be friends,” my co-worker said with confidence.

I hope so, otherwise el gato I didn’t want will be back in our lives and we’ll have to give it a name. I’m thinking something like Recurring Rico.

Calvin says, “Quit threatening my peace, will you?”