I dug it up. It had been struggling to survive for years. I re-planted it in a pot that was hanging from the apricot tree, except there is no apricot tree, just the trunk, which now holds several potted plants. Alf and I killed the apricot tree by pruning it too much. What did we know? We’re not farmers. The transplanted plant should be worried. We don’t know what we’re doing. 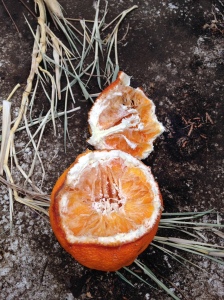 Our garden plants grit their teeth behind our backs. They hold whispered meetings at midnight, while we sleep, planning how to survive in spite of what we do to them.

The oleanders are the senior members, well established after many battles, and are now too big to die. They’ve gone through the worst of it, from neglect to over-watering. They now give advice to the youngest inhabitants. “Keep your water reserves if you want to live,” they say.

The roses are faring a bit better because they’re pretty. Beauty wins out every time. It’s what saves them from death. Nobody likes to see a withered bush, it speaks ill of the owners.

The lavender and rosemary have the best chance of survival. They’ve been bred to withstand heat and drought.

The jade, the newcomers, beat their chests. “We’ll outlive you all,” they say with a laugh.

The citrus trees roll their eyes. “We’ve been here 80 years, and we’ve seen it all. If it wasn’t for the rainy season we’d be gone, and so will you, so don’t be cocky because that will be your demise,” they say.

Calvin says, “You’ve murdered a nursery-full since I’ve been here. I’d have a warrant for your arrest.”

I like gawking at trees in their fall display. They’re so beautiful it hurts. The magentas, coppers, and dark greens flush out the year’s heaviness and replace it with an invigorating renewal of crisp air. I’m always amazed at the audacity of such a riot of color while in the throes of dying. I’m sure there’s a message there, but it eludes me at the moment. I’m too busy staring at the color palette.

I feel the same way in the spring when the cherry and dogwood trees are bursting with  blooms. I walk under them and look up. They envelope me in  their translucent petals, the whisper of fragrance, and a delicate air. There’s a message here too, but I’m transported.

Few things like these two seasons renew me like this. Not fireworks on the fourth of July, or a roaring ocean in the summer, or even a frolicking puppy.

I’m sure I’m not alone in this. Millions feel the same way. But having lived my life in countries with no fall foliage or springtime delights, I’m always arrested by these beauties. They’re gifts. They renew my soul.

Spring points to hope and a new beginning. Fall alerts to the death of all things, but in a dignified and magnificent way. We need to go out with a blazing splash. I plan to write a hundred blog posts, so after I’m gone, you can still read a new post every week for two years. After that maybe Calvin will take over.

Calvin says, “Good grief! What side of the bed did you wake up on? You’re getting weird.”

“I just made up my mind to be cremated,” my 93-year old friend told me recently.

“Then consider being sprinkled,” I said.

“My mother wasn’t a good cook,” my friend said. “So imagine my delight as a young girl when I came home from school one day to the aroma of stew simmering on the stove.”

“Did she surprise you with a home-cooked meal?” I asked.

“No, she was stewing meat for the dogs and I got a frozen dinner,” she said.

“I had a friend in college who slept in a bathtub,” Jules said.

“Because we called him Mr. Machine and he had shifty eyes and I guess he had to live up to his name,” he said.

“It’s not brunch anymore,” said the hostess in the hotel dinning room.

That would make a good title for a novel, I thought. The story would center around a woman of social standing searching for the perfect brunch in her city in order to invite her best friends to join her and announce she was going to kill herself, except in the course of trying different dishes around town she falls in love with the cooking of an old-timer Parisian chef whose food awakens the passions in her life.

“Your father has a hummingbird in the freezer for you,” I said to my artist son, James in church yesterday as we settled into our chairs.

“Is he dead?” asked my daughter, Miranda.

“He smashed into the window, right?” Miranda said.

“I have a hawk in my freezer,” said James. “For when I have time to draw it.”

“One of our neighbors, who says he’s a minister in the Universal Church, admitted he kept a pelican and other birds in his freezer,” said James. “You know, for when he needs a feather for a ceremony.”

Miranda rolled her eyes. My husband, Alf shook his head and I laughed.

It takes all kinds.

I wasn’t sure which kind we were though.

It reminded me of an incident when I was a child in Mexico. My family and I went on holiday to the beach and left our parakeet, Perry with Martina, the housekeeper. When we returned home she greeted us and motioned for us to come into the kitchen. Martina opened the freezer door of the refrigerator, where we kept the ice cubes and ice cream, and extracted Perry in a plastic bag. She pulled him out for us to see. His little white and turquoise body was rigid, his eyes were closed, and his feet were curled up. She explained he had died while we were away. Pitched forward and fell to the floor of his cage. If she had left him there, he would have turned into a heap of feathers and bones by the time we got back. So she stuck him in the freezer.

I didn’t believe her story. I just knew she had killed him. Out of jealousy.

Calvin says, “If I found a dead bird on the ground, I’d stick my nose deep into its chest and breathe bird into my memory bank.”

He keeps going back to another conversation when he’s not winning one.

I never want to go to so many funerals in a row ever again.

Have you ever read a story out loud to your dog?

She scattered his ashes around the tree that he had planted last year which died.

Don’t lose your stomach lining over that.

Cut me in half and count the rings.

Every time someone in the family died, my mother scheduled a cruise.

Why does coffee have a table named after it and not tea?