“You don’t suppose I put the knife someplace I typically don’t?” Alf said.

“That’s not the knife I mean.”

“Have you tried looking where you keep the dog’s things?” I said.

“Why would it be there?”

“You take it with you on your walks with him.”

“You said you never know when you have to defend yourself from rattlesnakes, runaway horses, and lost turtles,” I said.

Time and time again Alf and I marvel at people who are immensely talented and yet shy away from their gifts. We know of several with writing gifts who never put pen to paper. Others who have a terrific fashion sense and keep it all to themselves. And there are those who do pursue their artistic callings with courage and conviction, but with little support from friends and loved ones. In fact, they’re often told to get a real job. What is it about art that garners less respect than other professions like business or engineering? Heck, there’s more respect for the G-Man (garbage collector) than a painter. 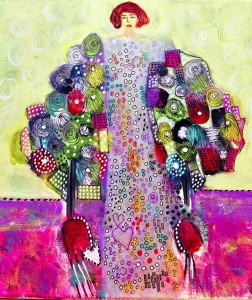 We live in a day of practicality. Does the job make money? Will it sustain you and a spouse and children? Will it give you a house, a car and a yearly vacation? Or will you have to eat out of a paper bag full of moldy veggies?

Being an artist is not for the fainthearted. It wasn’t easy living for Van Gogh and his generation nor is it any easier for people today. But one thing is different. Anybody with an ounce of skill is posting like mad on social media in the hope of getting noticed. Consequently there’s a lot of bad art out there. There’s also some good stuff. The serious artist, however avoids it all in favor of a website with class.

It’s like commercial fiction. The serious literary types look down their erudite noses at the fabulously successful writers who make millions with their popular, badly written novels. Secretly they probably wish they could make that kind of money, but they wouldn’t dare try. It would be beneath them.

So what’s an artist to do? I say keep at it, no matter how difficult the task. Post away. Talk it up. Send it out. You never know what door will open.

Calvin says, “I’m so glad I’m only talented in one thing – food. What’s for dinner?”

In a conversation I had with a friend about being raised with money.

“In my mother’s day, the maids who cleaned our houses in the neighborhood arrived in a Cadillac they had bought together,” she said.

Intrigued, I asked, “Did they also dress the part?”

“Yes. They wore wonderful hats, dresses and high heels,” she said. “They changed clothes inside the house, did their work, then changed back out of their uniforms and into their street clothes, got into their Cadillac and drove home.”

A class act, I thought.

“But my mother never left her maid out of her sight. In fact she followed her everywhere pointing out areas that needed attention.”

I wondered how she must have felt about that. Someone who owned a Cadillac must have known how to clean well, I thought.

“That was my mother, never trusting anyone to do the job right. Cadillac or no Cadillac.”

Calvin says, “Mistrust goes deep. Like my breeder who never left me out of her sight in case I barfed on her new carpet.”

On our walkabouts, we see things that capture our attention. Here are a few you might enjoy: 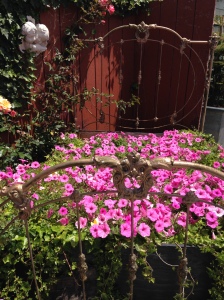 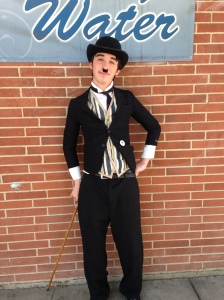 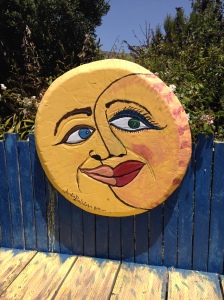 The bed lives at the entrance to a B&B in Half Moon Bay. It’s covered in pink flowers and crawling vines. It’s not a sample of what you’ll find in their rooms. In them it’s down quilts and naked geese quacking their complaints.

The nymph statue is perched on top of water fountain in Lithia Park in Ashland, Oregon. It’s an escapee from A Midsummer Night’s Dream. Puck harassed it so much, it fled.

The sun hugs a fence to somebody’s garden in Half Moon Bay. It’s Picasso-like expression was the reason it was rejected during auditions as an understudy for the real thing.

Charlie spends his time walking the streets in Niles reminiscing about his earlier movie making days. He’s the silent type. You won’t get a word out of him, but he’s hoping to be spotted by a talent agent who is out antique shopping.

I think the price of a therapy session has gone up since then, but Lucy is one of best. She’s irritating, impatient, and you’ll get what you pay for.  If you’re desperate she keeps office hours at the Schultz Museum in Santa Rosa.

Calvin says, “That nymph’s spray rivals anything I can produce.” 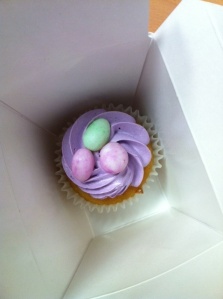 I feel like this cupcake. All dressed up, eager to step out, only to be closed up and placed on the shelf in the back of the restaurant where I await my debut. Then the dinner service starts and I am moved to the dessert station of the kitchen. From there I’m bounced to the rack where the garlic and onion odors seep into my box and I begin to lose my sweetness. Finally I’m moved to the walk-in refrigerator where I take up residence alongside the slabs of aged beef. If that were not humiliation enough, the sous chef, in his urgency to get at the meat, bumps me and I topple to the ground. He picks me up, opens me up, and discovers me upside down with my face in the frosting. And my eggs? They rolled out of the box, onto the floor, and down the drain. There went my grandchildren.

Calvin says, “If I had known, I would have waited at the bottom of the drain with my mouth open.”