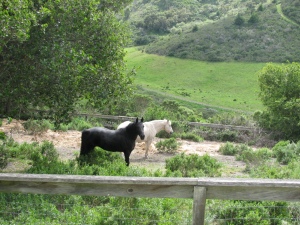 Alf and I took the back road through the mountain range from San Gregorio to Pescadero. The fog hung heavy this morning over the tree line. Small, brown rabbits with large ears and white cotton tails scurried across the road and disappeared inside the brush. Quail fluttered away. As we rounded the last curve and came down the mountain, a large field bordered by eucalyptus trees appeared on our right. Trailers, trucks, and SUVs were parked at the entrance. Inside, women sat in canvas chairs, each with a border collie by her side, watching a dog practice herding a flock of sheep. We had stumbled upon the Northern California Chapter of the Working Sheepdog Association.

The woman in the middle of the field whistled her commands. Every whistle had a different tone. The dog was half listening. He didn’t obey on cue, and the sheep broke formation. He tried again and again and finally brought them as far as the enclosure, but his over-eagerness frightened them and they scampered in all directions. By now the sheep wore an afflicted look and the shepherd came to their rescue and called them back to the pen.

“These dogs are young and are still learning,” said Judy, a 24-year old veteran of field trials, with Katie, her new border collie on a leash. “Some dogs learn fast, others more slowly, and a few never get it at all.”

If I were a border collie, I’d wouldn’t have the patience for all those whistles and stupid sheep. I’d take control and show them who’s boss.

“What you don’t want to hear are the words, ‘Thank you’,” Judy said. “That means your dog flunked and you have to call him off the field.”

This particular dog, while he missed quite a few of the commands, was showing promise. The ones who demonstrate no aptitude for herding become household pets.

That would be me again. I prefer the couch to all that exercise.

Border collies are born with the herding instinct. Even as puppies they will herd a flock of sheep. As a pet, a border collie requires daily stimulus and exercise. If you have children he’ll herd them. Bunnies, ducks, kittens, even you.

As I watched the action on the field, I thought about the handler. What if a dog knew more than his owner, but because he was under orders, he wasn’t allowed to shine? What if the owner didn’t improve? The dog would sink to his handler’s level of mediocrity.

The opposite was true also. The handler could show considerable talent while the dog showed no inclination to learn. This failure would also reflect on the owner.

In order to excel, it struck me that both dog and owner would need to be evenly matched. That would be the ideal partnership.

Calvin says, “Point well taken. If us dogs held field trials for owners, you’d see exactly what we have to put up with.”