“You don’t suppose I put the knife someplace I typically don’t?” Alf said.

“That’s not the knife I mean.”

“Have you tried looking where you keep the dog’s things?” I said.

“Why would it be there?”

“You take it with you on your walks with him.”

“You said you never know when you have to defend yourself from rattlesnakes, runaway horses, and lost turtles,” I said.

I watched the Super Bowl.

These things impressed me:

The maturity of the Bronco team. They played well.

The Panthers bounced around like puppies. Give them another five years.

The half-time, minus Beyoncé, was cool. I didn’t cringe for a minute

I thought the colorful ending was tastefully done.

And when it was over, there were no dead bodies to pick up.

I consider that a successful Super Bowl.

Now let’s get back to real life.

Calvin says, “My favorite commercial was those wiener dogs. A clever idea for those runts.”

I went yesterday to see the Super Bowl hoopla at Moscone Center. The NFL had set up a huge staged exhibit that cost $35 a ticket.

I wasn’t among them. I’m not that kind of fan.

Prices have skyrocketed around this event to the point of shocking me.

For example, if you flew into San Francisco from Colorado or North Carolina on Saturday, stayed in an Airbnb for two nights, watched the game and left on Monday, it would cost you more than $7,000.

I suppose that’s nothing if you’re a millionaire, and I saw a lot of them yesterday.

It’s amazing what we’ll do for our favorite sport.

But the sight that was most extraordinary were the SWAT teams, the police presence, and the security agents roaming all over the area.

Frankly, I thought I was in another country.

This couldn’t be the United States.

The security surrounding the Super Bowl rivals the stuff that happens when our president rolls into town for a fundraiser.

At one level you feel protected, but on another, it’s pretty darn scary.

I grew up in countries where heavily armed police, army tanks, and soldiers marched in and took possession of an entire city.

That was when there was a dictator running the country.

So what I witnessed yesterday sent shivers down my spine.

While the Warriors played their championship win this week, I noticed an interesting cultural phenomena on my street Tuesday night.

My Indian neighbors – those who have come to the US for the tech jobs – were hooting and hollering like the best of us over the game.

Their voices flowed out of their open windows and crossed the street to my house.

The American assimilation had begun.

One family has two children, a white Lab, and a Volvo. They’ve already been seduced.

Another family has a daughter in the elementary school around the corner. I often hear her arguing with her mother in perfect kid-lingo, sounding like a typical spoiled American child, while her mother answers her in her language.

I grew up in foreign countries.

I know what it’s like to be on foreign soil, eating different food, hearing another language all day long.

So a basketball game makes a lot of sense.

There’s no need for subtitles.

A basket is a basket.

A foul is a foul.

And a shouting coach needs no interpretation in any language.

I remember going to bullfights.

I would always cheer for the bull.

Calvin says, “You would. You prefer animals to people anyway.”

After the trouncing they got in Kansas City, which humbled them, and that’s a good thing, I’m hoping they emerge with renewed pumpkin spirit and go on to win the World Series.

In honor of the orange and black team, here are some pictures for the occasion: (those special macarons can be bought at Tout Sweet Patisserie here: http://www.toutsweetsf.com/) 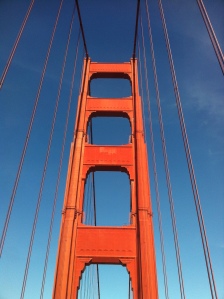 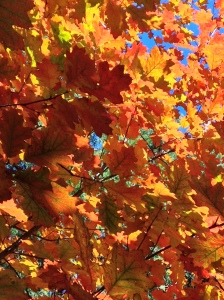 These are my pictures which I hope will inspire you to wear orange, root for the team, and look for ways to share the fall season with others.

Yesterday was a devastating day for the Brazilian World Soccer team.

The fans looked on in utter shock as they watched the Germans shoot goal after goal past their goalie. It felt like a nightmare making it the worst loss in Brazil’s history.

After the carnage, the final score was 7 to 1.

The Brazilians played hard and gave it their all, but they couldn’t get past the German talent.

Today is the semi-final match between Argentina and the Netherlands.

I’m holding my breath for Argentina.

It’s time we had a Latin American team win the World Cup.

And what better team than Argentina, one of the giants on the world soccer stage.

You’ll find me sipping matte in front of the TV screen yelling from the fist whistle to the last.

Calvin says, “Do I hope for a walk at half-time, or am I going to have to console you by putting my wet nose into your face?”

The London 2012 Olympics have begun.

Last night most of the world watched the opening ceremonies from pubs, outdoor giant TV screens, or at home.

The stunt James Bond and the Queen pulled off was, well, quite stunning.

Who knew the Queen was such a good sport? She must have been in rehearsals since Beijing.

Give me James. He can parachute into my kitchen for breakfast anytime he wants. Or for lunch. Or tea time. Dinner too. Especially dinner when he wears his tux, requests his martini shaken, not stirred in that snobby way of his, and then says, “James. James Bond” to whomever is inquiring. Even if it’s only to remind himself.

But getting that view of the queen’s bloomers and those dangling white legs as she fell from the night sky was shocking, to say the least. I was relieved it happened quickly because I was embarrassed by that vision in peach chiffon. Sort of like a cream puff with appendages descending from the sky. I think I felt a collective shock all around me.

After that entrance, everything else was a let-down.

Calvin says, “That collective shock came from me. I ran and hid under your skirt.”