My orange tree is almost white with blossoms. It looks like snow. The fragrance is intoxicating, especially at sunset and sunrise. I put myself in a chair under the tree today to take in the spectacle under the branches. The bees were humming and doing a happy dance in and out of the flowers. The hummingbirds flitted from branch to branch. As I looked up I could see touches of blue sky in between the leaves. Suddenly I heard rustling and the tree began to shake, blossoms came down like rain, and then the thump of oranges around me. I couldn’t see them, but it was those pesky squirrels again, racing in and out of the branches, almost laughing. 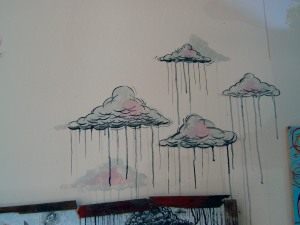 Our house is under the flight path to three airports. It’s normal to see planes come in for a landing every five minutes. From big wide-bodies to smaller commute aircraft, it’s my thrill to see these planes arrive. They are so low I can make out the airline. Even see the pilot wave at me. Today, because of the lock-down, there was only one or two that came in. Probably with six flight attendants pampering one passenger with first-class treatment. Now is the time to fly if you can get past security.

Occasionally I will see gulls fly overhead. When that happens I know it’s going to rain. That’s when I stand outside and wait for the big drops to hit.

Calvin says, “And I dash inside. I hate a bath.”

Every morning a black and white cat appears at the window of the apartment across from my office. A long stretch. A pink yawn. It pokes at the sill with its front paw testing to see if the window is open. It’s not. It sits up and leans against the glass absorbing the sun with its eyes closed. It curls its black tail and stays as still as a Latin American question mark at the beginning of a sentence.
Lately it hasn’t been at its post when I arrive, which worries me. I immediately think it finally walked out on the ledge, slipped and fell to its death, except cats don’t typically die this way because they’re acrobats and reverse themselves in mid-fall and land on all four legs. 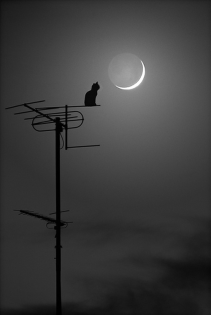 So what happened? I walk out of the building and there it is in the middle of a stacks of bricks, not-so thriving plants, and a rusting car. The lot next door is a dumping ground for all things discarded.
It’s black and white markings peak through the dying plants. It looks at me. It seems quite happy tip-toeing among the ruins. The sun is on its back. It’s free. I’m relieved and come back indoors.
The next day I come into my office, it’s back at the window looking down. I guess this is the arrangement with its owner, like a wayward son, sometimes coming home, but mostly on the prowl.
Calvin says, “A vagabond with a pied-à-terre.”

As a friend just posted on Facebook, “I’m thankful to God for daylight savings”. Frankly it’s a tradition that has outlived its purpose and it’s time to chuck it, but until that happens, this time of year gives me God’s paintbrush strokes all over the sky when I come into work.

No two sunrises are the same. Each one has its unique features.

Some are bold and striking. Others wear summer pastels.

The cloud formations are different, too. Sometimes they come at me with furious energy and tones. Others are quieter and appear in a whisper.

The morning sky is like a fashion runway with the color statement for the day. I look forward to it.

What floors me is my fellow passengers on the train. Nobody looks out the window at the spectacle. They’re blind. They prefer their inner landscape curated by social media.

Calvin says, “Most people don’t look up or down. Me? I love sticking my nose into a burning bush of sunrise.”

I just returned from a road trip from San Francisco to Tulsa, OK with a friend who was moving there.

It took us five days on I-40. First overnight stop was Bakersfield, CA followed by Flagstaff AZ, then Albuquerque NM, onto to Amarillo TX, and finally into Tulsa OK.

The thing that caught my attention in Bakersfield was the Barnes & Noble Bookstore. It was packed with people reading in there. Gave me goosebumps.

On our way out of CA to AZ I spotted kiwi orchards, orange groves and a plane boneyard that loomed in the middle of the Mojave desert. There must have been hundreds of aircraft parked there happily decomposing in the heat.

The drive through Northern Arizona with mountain ranges of pink rock flanking both sides of the highway left me wide-eyed. The word beautiful doesn’t even come close. 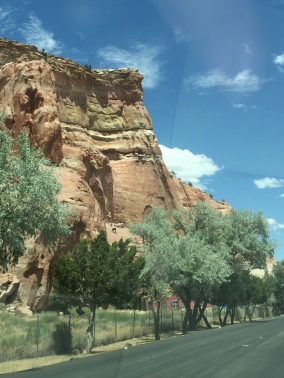 Albuquerque was a disappointment. Old Town turned out to be a bust. It looked like a movie backdrop with stores offering goods made for the tourist trade. There was nothing authentic about it. Molly, the border-collie who greeted us at the reception desk at the hotel was the best ambassador for the city.

It took forever to get out of New Mexico. Clearly you’re not supposed to leave. Eventually we crossed the state line into Texas and were greeted by miles and miles of windmills. And when we left the hotel the next morning, we were greeted by the smell of cows and their waste. We ran out of Texas.

As soon as we got into Oklahoma the green light switch came on. Trees, rolling hills and natural grasses flanked both sides of the highway. So was the 100 degree heat.

I have crossed the country many times by plane. Now I can say I have driven most of it. Would I do it again? Probably not, but I’m glad to have done it. It gave me a greater appreciation of the enormity of our country.

Calvin says, “You could have taken me, you know. Every one of those hotels were pet-friendly and I could have announced my presence in every state.”

This is the time of year for majestic sunrises and sunsets.

I see them because I’m on the subway at those hours.

While I’m busy clicking away, my traveling companions have their earbuds and electronic devises on.

They’re watching their shows, but missing a better one outside.

This phenomena even happens on a walk in the country.

The trees are in full blossom, the creek is gurgling, the ravens are cawing in the trees, the squirrels are zooming across meadows full of wildflowers, and the hikers? They’re plugged into their music with heads down watching their feet.

You’ve made us blind.  We now prefer our inner landscape where there’s nothing to see because it’s dark in there.

If we can’t enjoy nature anymore, what makes us believe we can enjoy each other?

Calvin says, “That’s why you need a dog to watch so he doesn’t roll in that wonderful, foul smelling cow manure.”

I hate 4 o’clock in the afternoon. No matter where I am, I still hate it. I hate it in New York, I hate it in Buenos Aires, and I hate it San Francisco.

4 p.m. is that time of day when the sun glares at you. If you happen to be driving it pierces you straight through to the back of your eyeballs like a laser.

If you’re at the beach the 4 o’clock sun bleaches the water, the sand, and your feet so you’re all one color – luminescent white. You look down at your legs and they come to abrupt halt at the ankles. You look up at the waves and they’ve disappeared. And when you look up at the sky expecting to see blue, you don’t, you see a blinding light, the kind that knocked the Apostle Paul to the ground on the Damascus road. While I’ve never had God speak to me like he did Paul, I’m sure it was 4 o’clock in the afternoon when he did it. The only epiphany I get at 4 p.m. is a migraine.

Four o’clock is the hottest part of the day for me. Not noon, but 4 o’clock. It’s when my upper lip perspires and my eyes leak. Pretty soon I see rivulets in my make-up. If I don’t dab right away, my make-up runs away leaving me completely exposed to my own skin. Of course I can grab my compact of powder and soak up the sweat with the small sponge, but then I don’t know what to do with it afterward. I’m certainly not going to toss it into my purse where it will stain the lining.

Four o’clock in the afternoon is the nastiest time of the day for another reason. My sugar level drops and I’m craving a peppermint hot fudge sundae. And of course I know I should fight the temptation and guzzle down a bottle of water instead. The tug of war intensifies between my low resolve and the temptation I know I should keep away from. That’s when I have a flash of insight, the same color as the 4 o’clock sun glare. I swap temptations.

I end up at the frozen yogurt shop. I tell myself it’s a healthier choice. Besides, it’s only 4 o’clock in the afternoon. I’ll have the rest of the day to walk it off.

Calvin says, “Who are you kidding? It’s a double passion peach and mango with a touch of coconut swirl. How do I know that? Because I get the drips.”