We’ve had plumbing problems at home this week.

It’s been disorienting to stumble into the bathroom at 5 a.m. to brush my teeth and to be shocked by running water splashing around my ankles.

This puts Alf into a panic. Computers are his field, not pipes.

Our solution: buy another vanity. 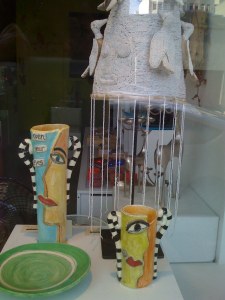 We went to Lowe’s armed with tape measures. We looked professional. We measured the vanities on display. We chose a very circumspect one, cherry brown with a white marble top. We hunted down a live sales person. He checked the inventory on the computer. It said they had two in the store. He began to look. Up and down the aisles he went. Nothing. Finally I asked him what the product number was, and now there were two of us, and then three with Alf. We stretched our necks searching for box # 400897 at a height of an eagle in a tree. Several strained necks later we returned to the computer to discover it had lied to us. There were two vanities, but one was a return because it was damaged, and the other was the display we had measured. How many others had measured it, kicked it, and shimmied it? We were not going to buy that one, but I was tempted to ask if we could get a discount on it. Nope, I didn’t do it. Our salesman was not to be daunted, so he called another store, and found a new one. So we put it on hold, dashed over there, confirmed they had told the truth, and paid for it.

This took the better part of the morning.

Our wonderful neighbor, a whiz at fixing all things broken and a truck owner, picked up the vanity with Alf and dragged it into the house. Like a moth to a flame, Ed’s attention was immediately drawn to the problem with the old vanity. After examining it he declared he could fix it. Why spend $400 on a new vanity when he could fix the old one for $32. So off he went to the hardware store, chose new parts, came back and got to work. What should have been a few hours turned into two days, with several additional trips to the store, but when he finished I had brand new, shinny silver pipes guaranteed never to leak a drop of water on me again no matter what time of day or night. Then Ed and Alf schlepped the new Lowe’s wonder back to the store to be returned to its black hole in the sky.

Calvin says, “You guys are ridiculous. What’s wrong with the hose out in back and one of the trees to pee on?”

I was out on the streets of San Francisco on Black Friday.

I know. I know. I must have been crazy.

But I wanted an experience.

I’ve never seen so many hordes in one place, except maybe at a ballgame, but then that’s expected.

I was in the center of town where all the department stores were.

Wave upon wave of humanity came up the streets, speaking different languages, all with one intent – to pounce on the deals.

I noticed many policemen, too. Most were on foot, a few were in patrol cars, and then two showed up on horseback.

The horses were enormous, well groomed and kept.

They walked up the hill where I stood and stopped at a red light. 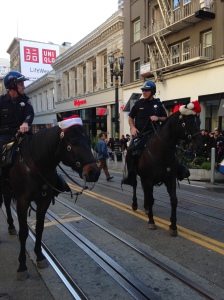 The tourists leaned over the curb and snapped a million pictures.

Not to be outdone, I stepped into the street and took some close-ups.

The horses posed for me.

How did those cops manage that?

Calvin says, “They’d get special treats for showing their teeth. Works every time.”

The stores are twinkling with lights.

The bell ringers are waving. Ringing is against the law now.

That was one of the sounds of Christmas that just departed. 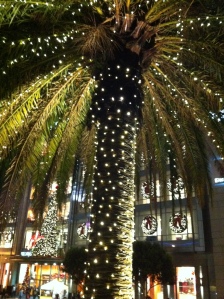 The beggars are begging, the singers are singing, and the fiddlers are fiddling.

I wonder what they’ll outlaw next.

That’s what I did this year.

It made it so much simpler. But boring.

I go into overdrive when pushing into a mob of women to get to the cosmetic counter.  Or ripping a pair of shoes out of another woman’s hands and buying them. The word glee comes to mind.

Let’s not forget the parking lot assaults for a parking space. That’s all out war.

And the juggling of bags, boxes and purses draped from your arms and shoulders that make you look like a shopping cart without wheels.

It’s the sights and sounds of Christmas.

It’s the festive delights of materialism.

Don’t go shopping without it.

Calvin says, “Christmas shopping. Just the thought makes me want to snarl my teeth and bite a Santa leg.”

Teddie tried not to be noticed, but he was the odd bear in the box. The rest of his siblings were white. A little boy yanked him out, inspected him, threw him on the floor and ran away. That’s when I saw Mama psycho-consumer speed by on the way to the beef jerky with her cart. Teddie saw her, too, scrambled to his feet, and hurled himself into the box like a high jumper in the Olympics. He made it just in time before he became road kill and sample meat for the food demonstrators across the aisle. His siblings were no help. He wanted to bury himself deep in the box and recuperate from his harrowing experience, but they didn’t even twitch a paw. They needed their space, they said.

Calvin says, “I would have squirmed and wiggled down to the bottom of the box and tossed a few of the white boys overboard.”